I’ve been neglectful. Only a few of my friends are into brewing, and fewer still are into coding and electronics, but this is all that’s been discussed in this blog. Most of the people who know me are more appreciative of the ludicrous messes I get myself into. I apologize for the oversight. This one’s for you.

September 16 was going to be a great day because I was planning to go all grain. This is a big brewing step. Instead of making wort with syrup or powder malt extract, the malt is made fresh on brew day from barley. It’s more complicated than just mixing grain with hot water. The grains have enzymes that have to be given time at just the right temperature to break down polysaccharides into
mono- and disaccharides that yeast can ferment into ethanol and other aromatic compounds. It adds time and complication to the brewing process, but brings the promise of more complex flavor.

I heated up some strike water, the hot water that’s mixed with the grain bed.

I put the grain into the mash tun, a container with a false bottom to keep the grain bed.

There are a few ways to dough in, which is the process of mixing the water with the grain bed. I chose to let the water seep in from the bottom. I had no idea, but things were already going terribly wrong. I circulated wort in from the bottom using my pump to improve mass transfer and keep the temperature consistent throughout the grain bed. I still had no idea there was a problem, much less that I was making it worse. 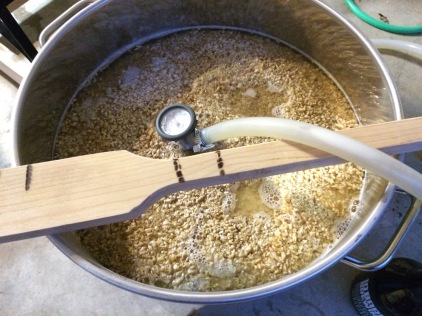 During the mash, I monitored the temperature of the bed. 150 F was the goal, so here is a picture of the thermometer right at 150 F. 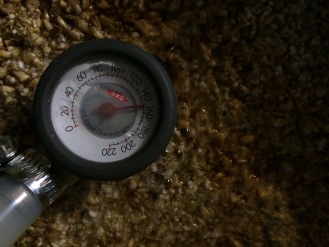 Of course, this picture is a gross misrepresentation of the average temperature of the bed. The temperature swung wildly between 140-160 F while I was chasing it frantically with ice and boiling water. I think I even added them simultaneously at one point. Oh well. It was still smelling nice, and it’s not problematic as long as it doesn’t hit 170 F for too long.

Finally, the mash was done and it was time to drain the grain bed into the brew pot. I used a continuous sparge, a technique of flushing the grain bed with hot water from the top while removing wort from the bottom. The objective is to rinse the sugar out of the bed. It wasn’t until this was done that I learned there was a problem.

The specific gravity of the final wort measured 1.04. I only extracted 37% of the sugar. 80% for this technique would have been good. 70% would have been bad. 37% is embarrassing. To troubleshoot, I checked the specific gravity of the wort still left over in the mash. It should have measured near 1.008 to reflect that the sugar had been rinsed out completely, but it came out to a whopping 1.02. Finally, while cleaning my mash tun, I noticed that the entire center of the grain bed was more like dough than spent grain. The problem became a little clearer.

It’s likely that the biggest mistake I made was that I didn’t mix the mash well enough. I had hoped a slow infusion from the bottom of the bed would thoroughly wet the grain bed, but that likely didn’t happen. Next time, I will use a different dough in technique. The other probable mistake was circulating and sparging at too high a flow rate. This has a tendency to create fast flowing channels, which cause poor mass transfer.

Fortunately, I had some dry malt extract lying around. I abashedly threw a few pounds into my brew pot to bring up the specific gravity and started the boil. I also boiled vigorously to decrease the final batch volume, further increasing the specific gravity.

Little did I know that my brew day of horror was only beginning.

I had my first boil over. The hot break was fast and vigorous, and it happened while I was still cleaning out my mash tun. I caught it pretty quickly. The mess was minimal. Compared to the mess that was coming, it was nothing.

I drank a beer with Trang during the boil, which was probably the nicest part of this brew day. She went to bed, the boil ended, and it was time to cool the wort. I made the hose attachments and started to chill, but the wort stopped flowing less than a gallon in.

I took a peek at the outlet hose for my brew pot, and there was obviously debris clogging it. I realized that, in my attention to the mash, I completely forgot to put the straining adapter into my brew pot. I had enough hops additions that I added most of the whole hops straight into the pot instead of in a hop sock. The hops were clogging my pump, and I had to stop them before they clogged my heat exchanger. Since the exchanger is made with 3/8 in tubing, a clog could potentially be incapacitating to my brew day and would be an annoying ordeal to clean.

I cut the power to the pump and disconnected the lines, spilling boiling hot wort everywhere. I cleared the lines manually and reconnected the hoses to eject through a stainless strainer. I was amazed the Chugger held up. There was a lot of hops in that pot. I was spraying hot wort everywhere while trying to hold the strainer in place. At one point, I sprayed the wort right on my hand. I dropped the strainer and the hops I’d filtered out flowed right back into the pump, clogging it again. I disconnected the lines again, cleared them again, and strained the wort again. Finally, it looked like things were running smoothly.

The mess was awful. My hands were hurting from handling boiling hot metal fittings and boiling hot wort. I was sticky. The floor of my garage was even stickier. Here’s the pump, covered in hops. 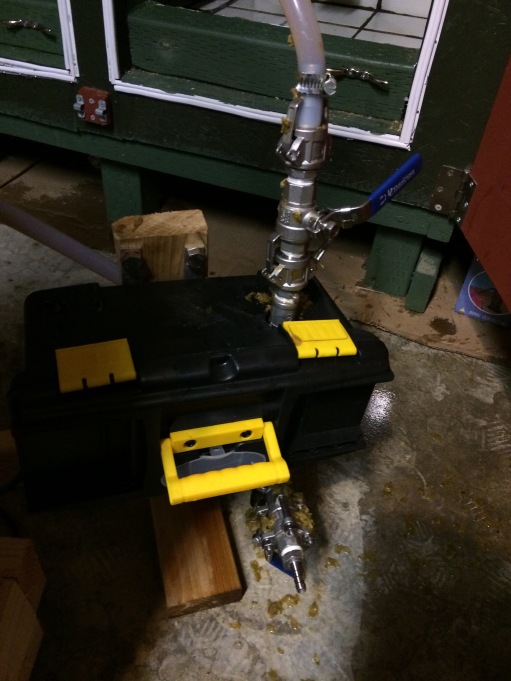 But, when brew day was over, I had 8 gallons of wort in the fermenter. That’s better than having to throw it all away. The final recipe was:

I now appreciate how much better a crash landing is than a plain old crash.

One thought on “Crash Landing”